Kevin and Michelle run a small B&B and campsite located in eight acres of the beautiful wooded Wray Valley on Dartmoor. Michelle tells their green story...

"We bought Riverside Farm in January 2019 as a retirement project so we could spend more time together - and outdoors on Dartmoor. The property had been a family home for over 30 years and was in need of a great deal of tender loving care and the grounds had not been well managed. But our journey did not start here…

Kevin fell in love with Dartmoor while studying computing at Bristol University in the 1980s. In 1987, he moved to Hexworthy at the very centre of Dartmoor to create and run an outdoor activity centre, but had to give it up 10 years later due to family commitments. In 2010, Kevin became a member of the Dartmoor Search and Rescue Group and is now a Hill Party Leader and committee member.

I studied Geology at university but also entered the computing industry in the 1980s as a business analyst. I eventually grew more and more dissatisfied until in 2001, I gave it all up to do a masters degree in Environmental Sustainability. In 2002, I became an environmental consultant, specialising in minimising the impact that the waste arising from taking apart nuclear power stations has on the environment. However, this role meant I had to stay away from home two nights every week, and the strain was beginning to tell.

Kevin had always wanted to return to Dartmoor so, in 2018, we started looking for a suitable property. In September, we saw that Riverside, located within the Dartmoor National Park and surrounded by broadleaved ancient woodland, had been reduced in price and was now within our budget. It ticked all the boxes on our checklist but we knew it needed a lot of work as the house and grounds had become quite rundown. 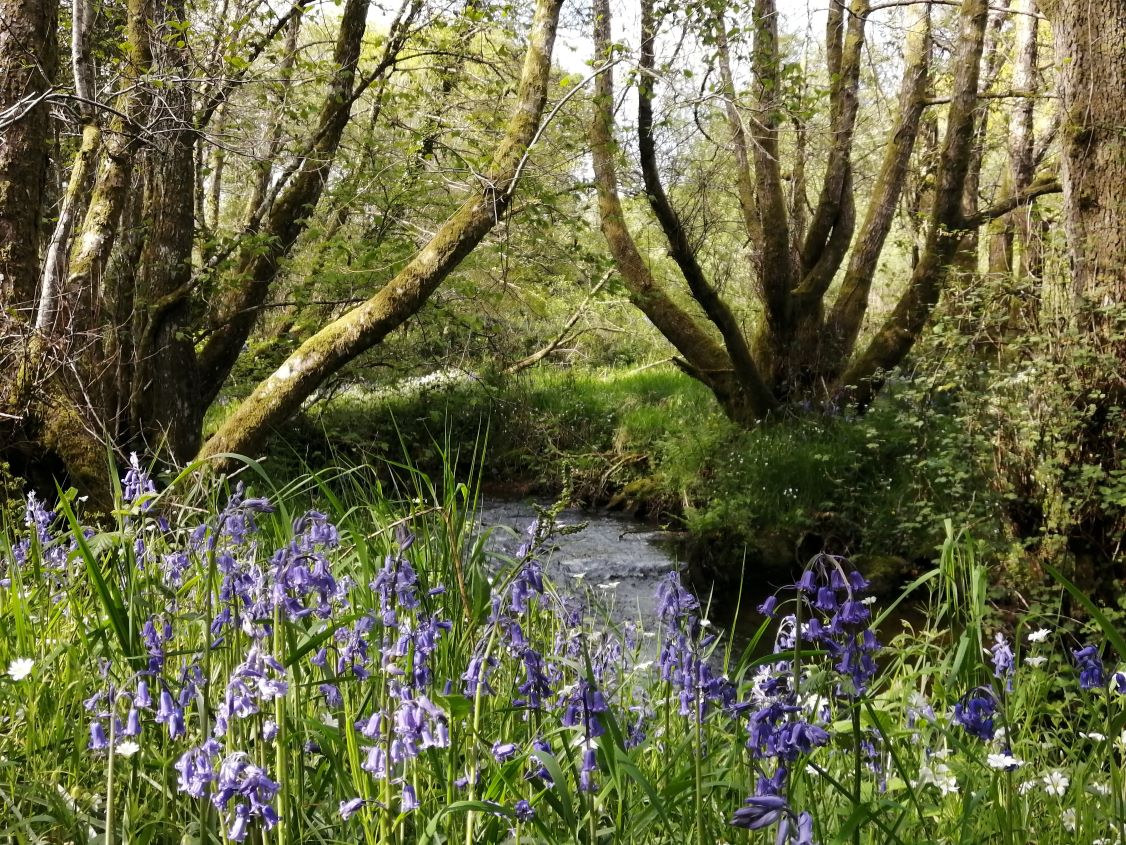 We moved in in early January 2019 and the hard work began in earnest. To begin with, we focused on the B&B, renovating all three bedrooms to B&B standard using local tradespeople where we could not do the work ourselves. Our first room became available at Easter 2019. Our third and last room was ready to open just as Covid-19 forced us all into the first lockdown.

From the beginning, we have been determined not to have single-use plastics in our rooms or at the breakfast service, opting instead for refillable containers. We produce a lot of the food and drink ourselves including apple juice, jams, and bread.

One major task was upgrading the kitchen to be suitable for commercial use. Wherever possible we have reused materials, for example, the sink and some cupboards are in the camper’s kitchen, some cupboards are now in use in the garage and the rest are in use in the back of the stables. In the guest lounge, we have replaced some old double-glazed doors and a window, but the old doors have been reused by a neighbour and the window is now in the shower block, providing light and passive warmth in the summer. During winter 2022 we installed underfloor insulation and heating in the guest lounge. 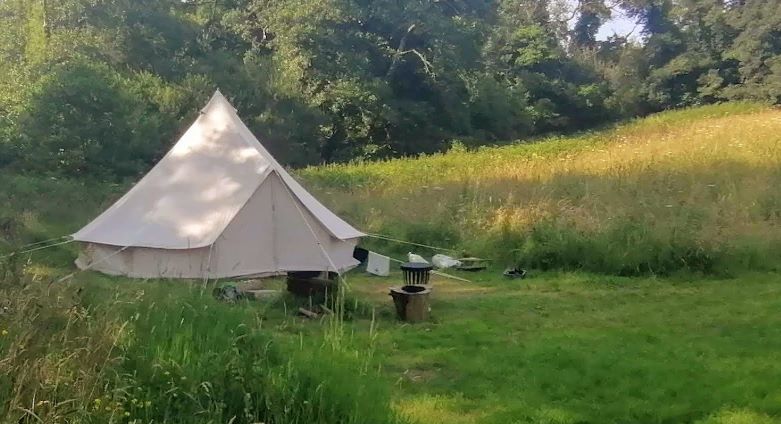 Camping pitch in the Hay Meadow

The campsite was opened after the first lockdown in July 2020. The site is part of the Nearly Wild Camping Club; all its pitches are in clearings in the woods which have been created for greater biodiversity. When the site first opened, we only had a compost toilet, and Wray Brook provided the washing facilities. All the pitches in the Hay Meadow field are separated from each other by biodiversity corridors of unmown grass and wildflowers, with areas of bramble retained for the valuable habitat they provide. They do have to be kept under control though otherwise, they take over. The Hay Meadow is hand-scythed and raked in the late summer and autumn to encourage wildflower growth.

The earth excavated for the base slab of mum’s lodge was used to form the terraces in the sloping Hay Meadow camping field and the large granite boulders removed now form bollards in the car park to prevent vehicles going down onto the pitches.

We have gradually added more facilities including hot showers (largely heated by solar energy through thermal and photovoltaic panels) and flush toilets as these were demanded by our campers. These all go to our septic tank so we monitor the usage closely and if necessary close a pitch to reduce the number of campers. But as the compost toilet is closer to the main camping field it still gets a lot of use. 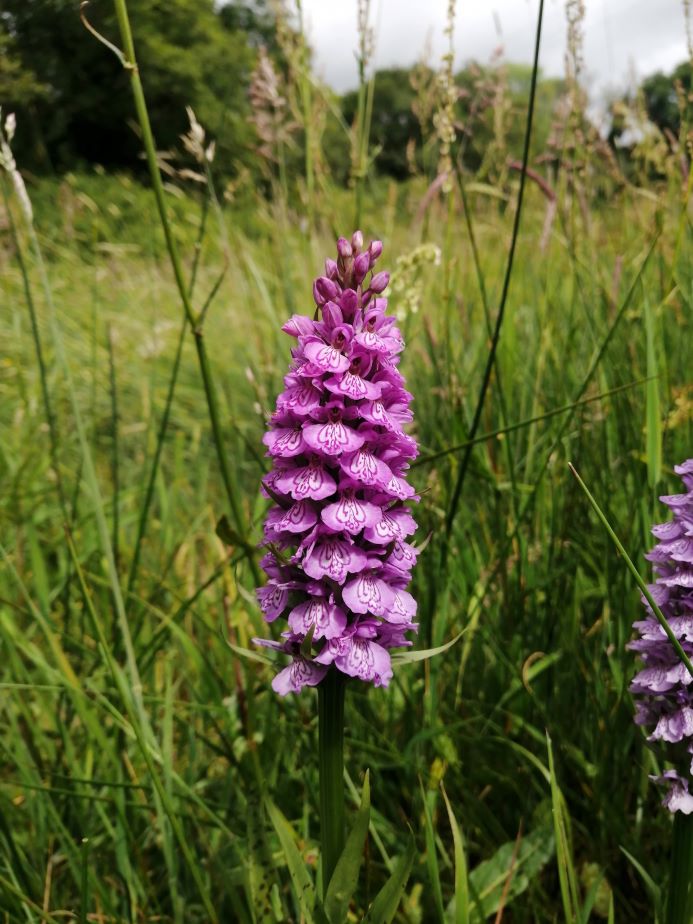 Animals
When we came out of lockdown in June 2020, we decided to adopt ex-battery hens from the British Hen Welfare Trust. They enjoyed their freedom as much as we did. Our younger guests love feeding the chickens and learning where eggs really come from. We have continued to adopt hens periodically.

In summer 2022, we rehomed two farm cats from the Cats Protection League (CPL). You may see the young black female (Kitty) hunting during the daytime but we never see the older tortoiseshell (Granma) except on the trail cam. Their job is to keep the rodent population under control. Whenever you have chickens, you also have rats and mice.

In the future, we hope to have a couple of old breed pigs for a few years to help clear the brambles and bracken from our woodland to the south of the house. 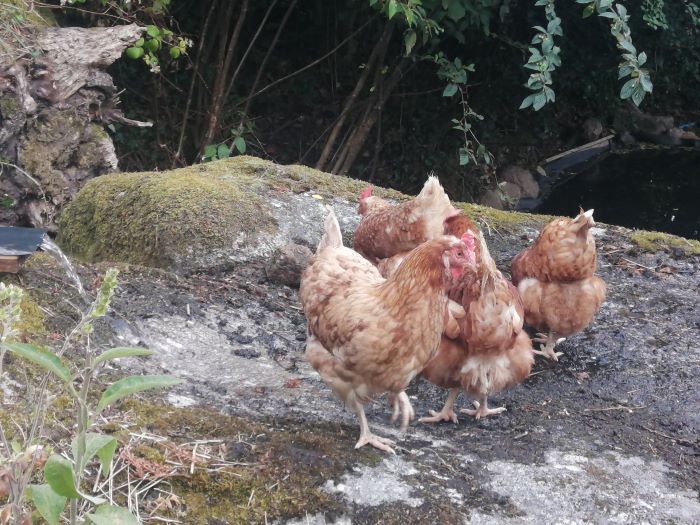 The Wray chickens enjoying a paddle

One of the first things we did outdoors was to dig a pond in a very boggy area. Although we have a stream, we did not have much still water, and very quickly it was populated with tadpoles. We also put up a polytunnel so we could extend the short growing season here on Dartmoor.

We realised that the private water supply to the house was not suitable or reliable enough for public supply so took the step of sinking a borehole and having a modern UV treatment system installed. Recently we became a Refill Station with refill.org.uk so members of the public can now drop in and ask us to refill their water bottles from this Dartmoor spring water.

We were fortunate that the main house already had an array of photovoltaic panels generating up to 3.5kW and a double panel of solar thermal tubes, but we upgraded the entire hot water system to make the best use of onsite renewable energy technology.

In spring 2022 we cleared the brambles off a Devon bank (cross between a wall and an earth bank) and the surrounding area beside a stream and when we had finished it was such a large bare space, we wondered what to do with it. We decided to create a water feature flowing over a large granite outcrop and into a pond. During the hot, dry summer this became a haven for wildlife as it did not stop flowing; even the chickens enjoyed a paddle.

In August 2022 we installed electric vehicle chargers: one at the B&B and one in the campsite. We will be listing these for commercial public use as there is very limited public availability in this part of Dartmoor.

During winter, once the trees become dormant, we work hard on the grounds. Tasks in previous years have included hedge laying, rejuvenating five very old apple trees, planting a new 15-tree apple orchard with local varieties, clearing the bramble from the riverside, coppicing, and general tree maintenance. We leave standing and fallen dead wood in place where it is safe to do so but where necessary we fell trees for safety reasons. The felled wood is either stacked as habitat or brought back to the house as firewood. 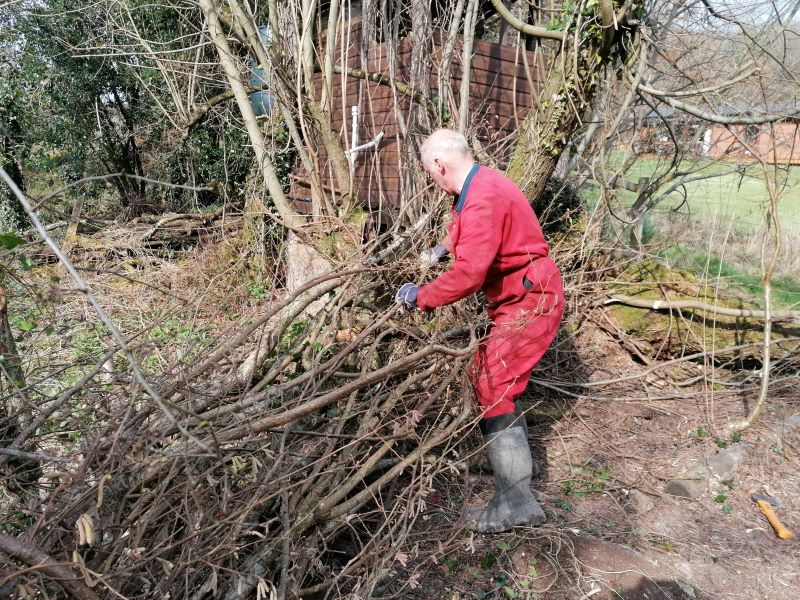 Future projects include bankside tree coppicing to minimise bank erosion, coppicing within the woodlands to create glades and a mix of tree ages within the woods. In September 2022 we entered into an agreement with Moor Trees, as part of their mission to reforest Dartmoor with the aid of volunteers, to plant over 200 metres of new native hedgerows with baby trees grown here on Dartmoor from seed collected from local woods. These will provide habitat corridors linking the two areas of ancient woodland to the east and west of us.

We are in discussion with Dartmoor National Park to provide a permissive path to connect the Wray Valley Trail to the paths on the other side of the A382.